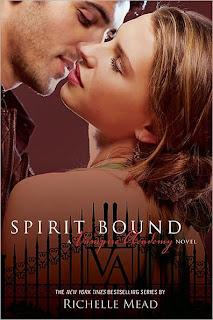 Synopsis: After a long and heartbreaking journey to Dimitri’s birthplace in Siberia, Rose Hathaway has finally returned to St. Vladimir’s – and to her best friend, Lissa. It is at long last graduation, and the girls can’t wait for their real lives beyond the Academy’s iron gates to begin. But Rose’s heart still aches for Dimitri, and she knows he’s out there, somewhere.
She failed to kill him when she had the chance. And now her worst fears are about to come true. Dimitri has tasted her blood, and now he is hunting her. And this time he won’t rest until Rose joins him . . . forever.

Review:  (***SPOILERS***) Spirit Bound picks up where Blood Promise leaves off, with graduation, a trip the the Royal Court and more shenanigans, including a trip to Alaska to bust out a felon they helped place there, a secondary trip to Las Vegas (under the allusion of a girls’ weekend of course) and then some.
Spirit Bound really delivers after the last cliff-hanger.  Rose receives promising letters from Dimitri, telling her he’s watching her, waiting to kill her.  But she won’t give up on him and thus begins her quest to the aforementioned places.  And that’s why I love Rose: her strength and resilience.
We get to see more Rose-and-Abe relationship developments.  I do like Abe, he’s plays the typical father so well, but with the spice of organized crime (which Rose often openly sneers at, but probably deep down inside somewhere, is grateful to have someone so powerful in her life).
The change in Lissa is astonishing.  In my review of Blood Promise, I mentioned that Lissa seemed like a weak character, but I had wondered if Mead deliberately wrote her that way, in part to counter-balance Rose, but also for future character development.  Happily, I was right and I enjoyed seeing her pursue her Spirit, as well as reconcile with Christian, while still standing up for herself.
I still love Adrian…he’s so incredibly charismatic and fun, but deep down, you know he cares deeply for Rose, politics and image be damned.  If she doesn’t end up with Dimitri, I can honestly say I won’t be disappointed if she ends up with Adrian.
Dimitri.  Le sigh.  I want him to be able to turn back into a dhampir so badly, because who doesn’t love Dimitri?  I had an idea of how he could turn back, but not an exact method.  His change showed just how powerful Lissa has become and I’m eager (although sad) to read the chapters in this series to find out the ending.
But that cliffhanger?  That cliffhanger left me speechless.  Well done, Richelle Mead.  Well done.

About The Author:
Scorpio Richelle Mead is a New York Times and USA Today bestselling author of urban fantasy books for both adults and teens.  Originally from Michigan, Richelle now lives in Seattle, Washington where she works on her three series full-time. Before becoming a writer, she considered a few different career paths. She received a liberal arts degree from the University of Michigan, an MA in Comparative Religion from Western Michigan University, and a Master in Teaching (Middle & High School English) degree from the University of Washington. In the end, she decided writing was the way for her but believes all of her education prepared her for it.

A life-long reader, Richelle has always had a particular fascination with mythology and folklore. When not writing,, she enjoys bad reality TV, traveling, trying interesting cocktails, and shopping for dresses. Lots of dresses. She is a self-professed coffee addict, fights a constant (and losing) battle with procrastination, and has a passion for all things wacky and humorous.
The following two tabs change content below.