Fourteen-year-old Luce has had a tough life, but she reaches the depths of despair when she is assaulted and left on the cliffs outside of her grim, gray Alaskan fishing village. She expects to die when she tumbles into the icy waves below, but instead undergoes an astonishing transformation and becomes a mermaid.

A tribe of mermaids finds Luce and welcomes her in—all of them, like her, lost girls who surrendered their humanity in the darkest moments of their lives. Luce is thrilled with her new life until she discovers the catch: the mermaids feel an uncontrollable desire to drown seafarers, using their enchanted voices to lure ships into the rocks. Luce's own remarkable singing talent makes her important to the tribe—she may even have a shot at becoming their queen. However, her struggle to retain her humanity puts her at odds with her new friends. Will Luce be pressured into committing mass murder?

With a cover like this, who wouldn’t have big expectations (I MEAN, LOOK AT IT!)? The cover for Lost Voices promises a sort of fairy tale, magic, and girlish innocent youth.

It doesn’t deliver. Lost Voices by Sarah Porter is the story of Luce, formerly a human who transforms into a mermaid with a beautiful, deadly singing voice. On the night of her transformation, she’s found by the mermaid tribe Queen, Catarina, who brings her back to the other girls, where they teach her the whys and the ways of becoming a mermaid. Seemingly, most of the mermaids have lost their humanity – fitting since they are no longer human. The way to become a mermaid is rather simple: have something really awful done to you and accept that there is nothing left for you in your human world. Your body liquifies, and reforms as a mermaid. If you aren’t near a coast, travel through sewage pipes and drain pipes until you reach a body of salt water. Because the way to become a mermaid is through negative experiences, the mermaids hate humans, regardless of having been human once themselves. They use their beautiful, deadly voices to lure and sink ships, for no other reason than entertainment and vengeance. The premise of Lost Voices is great. It is the stuff out of sadistic fairy tales. But the execution of Lost Voices fails miserably. The story meanders often, with no real thought to plot lines and story arcs, leaving the reader wondering exactly where it’s going or when it will start getting interesting. None of the characters are all that vibrant – save the most hated character, Anais, who is so profoundly vapid and cruel, she becomes interesting by virtue of that alone. The story feels very two-dimensional and flat, exactly the opposite of the world it is trying to describe. And though Lost Voices is the first in a mermaid trilogy, the ending is both abrupt and trailing off, of a sort. It just…ends. When it ended, I found myself wondering where the author was trying to take me, and if she really wanted me to read the next book. I can confidently say I won’t be.

“At first there were just one or two of them off in the distance, but soon the water was full of drifting, sinking bodies.  They looked like enormous raindrops plummeting all around her, their arms slowly wheeling through the tangles of seaweed.” 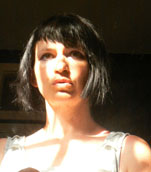 (courtesy of sarahporterbooks.com) I’m a writer, artist, and freelance teacher. I teach creative writing workshops in the New York public schools via Teachers and Writers Collaborative; I’ve worked with kids in grades K-10, but I’ve focused on junior high and high school for the last several years. I don’t think I would have written a YA novel if it weren’t for that experience! Reading my students’ intense, passionate poetry and stories recalled my own emotions at that age. Lost Voices was my attempt to write the book I most needed as a twelve-year-old struggling with what it means to be human: a book I never really found. As for why I became a writer, well, I grew up moving around a lot. I was shy and didn’t have a lot of friends, and I read all the time. Books sustained me and gave me a sense of belonging when I was young. All the voices of all the writers I’ve loved throughout my life seemed to flow together into something like a speaking whirlwind. Literature for me has always been a force greater than the individuals who create it. And because that force meant (and means) so much to me, I wanted to be a part of it, to give it what I could and contribute to its power. I live in Brooklyn with my wonderful husband Todd, an artist and fabricator of electronic art, and our cats Jub Jub and Delphine. I have an M.F.A. in Creative Writing from City College.

One response to “Review: Lost Voices by Sarah Porter”